By apegamerApril 29, 2021One Card Wonder
No Comments

In ancient times, about 2014, I had just signed my first game, and I was sort of waiting for inspiration to hit, worried that I would end up being a one hit wonder. At the time, I was playing a lot of 7 Wonders, which remains one of my top few games. 2014 was also the first rush of the microgame trend, which I found really appealing. I wanted to be able to have a similar experience to 7 Wonders, that I could play while waiting for dinner at a restaurant. I can’t recall exactly how it happened, but those ideas converged with the idea of being a “one hit wonder” and gave me the title, One Card Wonder.

With that title and a fairly clear experience in mind, I started the notes that would establish most of the gameplay: Build an ancient wonder of the world using a single card. Borrowing a little from New Bedford, draw resources from a bag, which allows for some controllable randomness without a large board, or tons of setup. Add a few extra buildings, and you have most of the elements that make up the game.

Quick play time was probably the most important element in building that experience early on. One of the ways I achieved that was by keeping the number of decisions on a turn low. The main decision was between using resources, collecting resources and generating resources.  If you have enough resources, build your wonder. If you don’t, see if there are good resources you can take. If there aren’t, generate some resources and choose some. To avoid getting stuck with only stuff you can’t use, you can trade for coins. I also included two things in the design from the beginning to increase the amount of player interaction.

First, resource generation incorporates one of my design pillars: when you generate new resources, anything you don’t take joins the general supply to benefit others. Collecting resources from the general supply has a draft-like feel that that becomes especially important with lower player counts. Individual player supplies are limited so extra resources return to the supply. And because even “unneeded” resources can become coins, you’re never drafting solely to deny resources to an opponent. Eliminating “hate drafting” doesn’t make those decisions any less challenging, though. While you initially had to choose one of two supply spaces to add the extra resources to, that was simplified early on to just a single general supply.

The second addition is trading resources. Open trading has a big potential to slow a game as players negotiate, and negotiation can easily overshadow strategy and add rules complexity. My solution was to change one basic requirement. Instead of requiring trades to involve the active player (as in Catan for example), trades in One Card Wonder can only be negotiated when it is NOT your turn. This is explicitly limited to games with 4 or more players because the logistics just don’t work with 2 or 3. Due to this rule, larger games are more flexible and less dependent on random production, while smaller games are more strategic with more focus on the draft. The trading rule also helps keep turns fast because you never have to wait for negotiation, and it has the added effect of encouraging players to play quickly to disrupt other players’ negotiations..

The first several versions of the game tracked points, with most coming from wonders, a few from buildings, and some of the wonders had variable points based on collecting specific resources. Completing a wonder was always the end game trigger, but the winner was decided by points, so that some wonders gave you more of a choice to rush the game. (version 1.1) 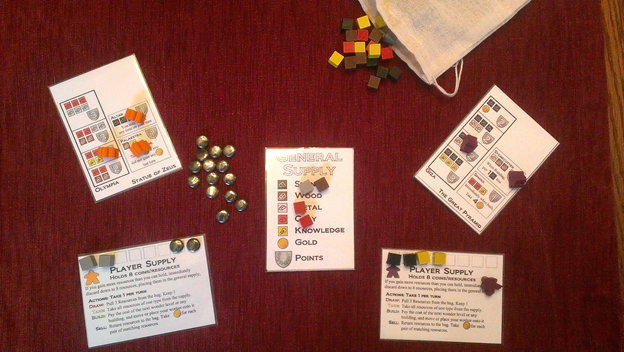 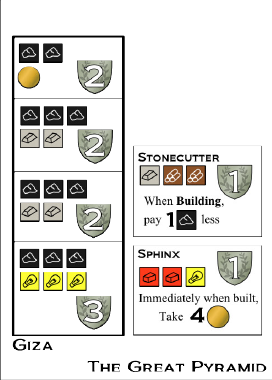 The Great Pyramid in Version 1.1

I took One Card Wonder to Unpub 5 as more of a backup game. When the other new games I took were done after one game, I switched to OCW, not knowing if it would work for a whole game, let alone a whole playtest session.The response from players both during and after the event encouraged me to move ahead with the design. Highlighting the importance of getting outside feedback, because you only know your game about half as well as you think.

Still, there were changes to be made. While variable scoring sounds like it adds strategy, those playtests revealed it’s not actually fun when only some players have the option to rush the end. Over the next few versions, I balanced the wonders and buildings to make the game move faster. From a mathematical perspective, wonders were based on 10 points, with 2 resources or one coin per point. On a given turn, you will typically net 1 to 2 resources, making it fairly easy to balance relative to resources. That also means that if you have the opportunity for 3 or more of a resource on a turn, you should almost always take them. Buildings were adjusted based on that formula to have a net gain of 1 or 2 resources—either immediately or based on probability over the game—balancing out the turns used to build them, so that choosing to build a support building becomes a question of opportunity and timing. Most of the versions are only subtly different.

I created a game summary sheet [sometimes called a sell sheet], and was selected for speed dating at Gen Con in 2015. Having an inherently quick to teach and play game was perfect for a speed dating scenario because publishers could jump right in and play a decent amount of the game during the short pitch. I was in the extremely fortunate position of being able to consider several offers from publishers after the event, and made sure to research their publication history, Kickstarter approach and results, and social media, as well as getting some third party opinions. This is something designers should do before ANY pitch, and it has only become more important since them. In the case of OCW, APE Games had the right mix of experience, enthusiastic customer base, and a vision for the game that aligned most with my own, and my work with them since signing the contract has proven it to be an excellent decision.

Back to the design itself. After signing with APE Games, I worked with them for playtesting and development and came up with several key changes. First, the cards got bigger, giving me more room for the wonder stages, art, and to move the player supply, so that everything was truly on one card for the first time. Second, I eliminated the points, which just make it longer to figure out who is winning, and made it a race to complete your wonder first. Third, buildings started to move off of the Wonder cards. I also had enough testing to start balancing the wonders based on overall complexity. Here, the Pyramid is a 2 out of 3 because of the mastaba and coin cost in the fourth level. 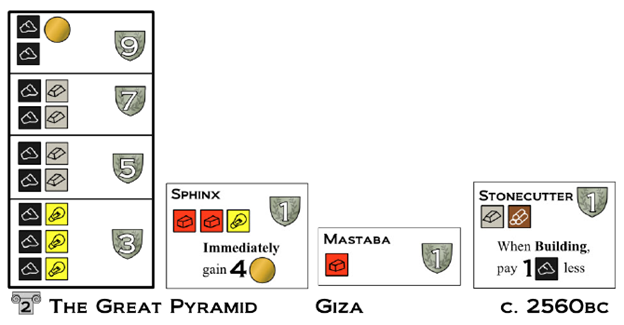 Version 1.6b, right after Gen Con. Bigger, but all the same information on the cards 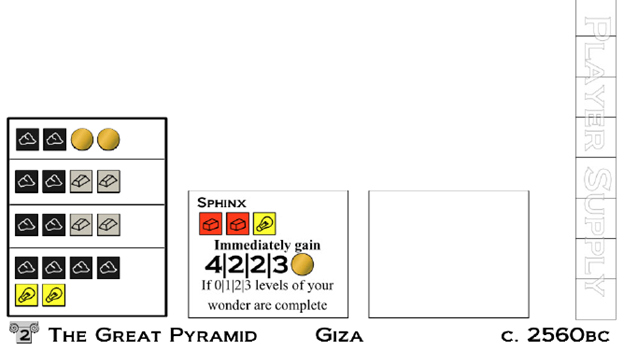 Version 1.7, late 2015. Much more efficient use of space, and much simpler

More room on the cards also gave me the chance to standardize the wonders more. Instead of generic boxes, I split the resources into pairs and occasional singles, keeping the same total number, and arranged them into representative shapes (i.e. the pyramid is a pyramid, the Colossus looks like a statue) (version 1.8). 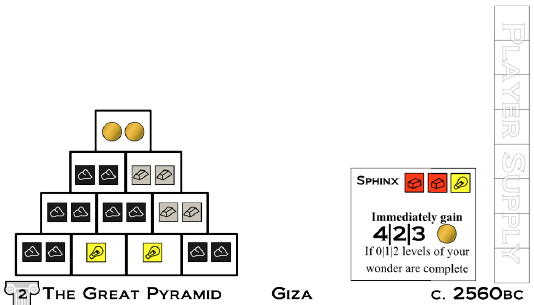 Version 1.8, Early 2016. The wonders take shape. Buildings are much selective 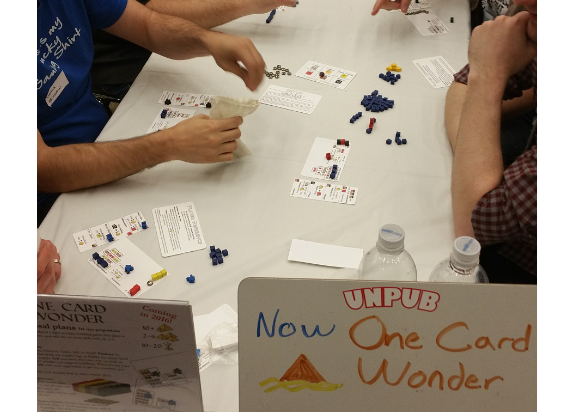 This small change makes it feel significantly more like building an actual wonder, as you see it take shape. It also adds some interesting choices in how to build. Before, you typically only had the resources for one big stage at a time. Now you have to decide which parts to build, which changes the future resources you’ll be able to place, and you have to consider whether to hang on to a lot of resources and combine actions or give yourself more opportunity to collect resources. 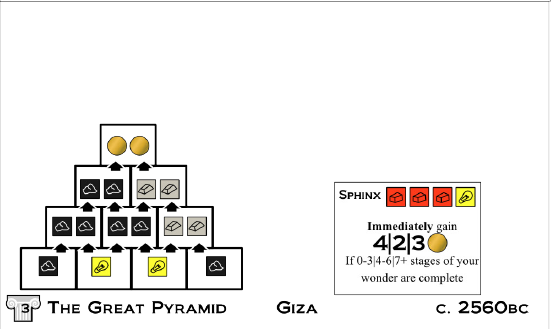 The game approached its final form in late 2016 (version 1.11). Somewhere in 2016, buildings briefly became individual tiles that you added to the wonder, but it was faster, easier, and less work to balance to collect all the buildings removed from cards into thematic sets, which are selected during setup to help balance and add more variation. Sadly, players once again have two separate components to manage, but the wonder is still only one card. Wonder resource costs were simplified slightly, to focus on two main resources with only a small number of additional resources. Wonders were selected to provide a balance of resource needs.

The final major change was something that had come up both in playtesting at my end and from APE. Matching feedback from independent sources is (nearly always) a sign that a change is needed. Players wanted to be able to make a BIG move, something that felt like shaking up the game. I achieved that not by changing the wonder, but by adding Leaders, which can give you a one time use ability. Each can give you a big advantage, but your opponents players can band together and pay you a tribute of resources to cancel your leader’s ability. The difference between the resources you collect and the leader abilities is relatively small, so you still get a bonus either way, but it leaves enough room for interesting play.

Finally, I want to comment on some of the theme choices. From the start, I knew the game needed a lot of wonders. The first version had 20 different wonders, and quickly expanded to 30 wonders, although that number eventually dropped as wonders were simplified and I focused on the most unique ideas. I wanted to incorporate more than just the standard Mediteranean wonders, reflecting how global the ancient world really was. I try not to design around specific characters so that players can put themselves in the roles, so to make sure the Leaders didn’t take away from that, I tried to highlight a variety of men and women from the cultures represented by the wonders. And although I think I could have done even more, playtester feedback has been very positive about those choices.

Those reading closely will notice that One Card Wonder has been in development for over 6 years, including plenty of testing, development, and updates to the graphic design. I feel lucky and grateful to APE Games for believing in the game and sticking with it. My most recent play was the first time I had picked it up in a couple of years. It was nice being able to approach it fresh, like many of the readers will.  I was delighted that the gameplay was still snappy and full of great little challenging decisions. It is absolutely the game I wanted it to be when I started, and that is no small wonder.