APE Games is pleased to announce that it will co-publish Plunderbund with HutChu Games.  Plunderbund, designed by Woody Hutsell and Adam Chunn, models an emerging market for black market goods in a setting that combines high fantasy and 1920s Americana. APE Games, a Houston-based company founded in 1997 is a recognized brand with an existing strong global network of partners and a portfolio of strong game offerings.

“Even before our Kickstarter, APE Games provided us valuable feedback on Plunderbund”, said Woody Hutsell, co-Founder at HutChu Games.   “We believe APE Games can be an even bigger part of our story by helping us reach more customers through its distribution channel.”

“APE Games is selective when deciding which 3rd party games to co-publish.”, said APE Games president Kevin Brusky.  “It was clear from the start that Plunderbund’s art and graphic design met our standards, but it was the game play that sold us. This is a deep yet approachable black-market economy simulator based in an urban fantasy world resembling America 100 years ago. It is a unique take on the deck-building genre, with elements of worker placement and area-of-influence.” 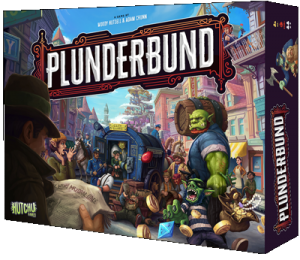 HutChu Games (HutChu Enterprises LLC) was founded in 2016 by Woody Hutsell and Adam Chunn to serve as a creative outlet for board gaming inspirations.